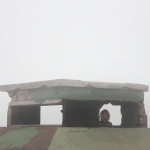 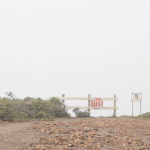 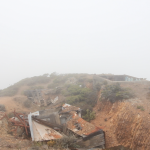 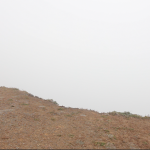 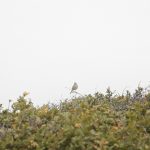 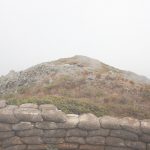 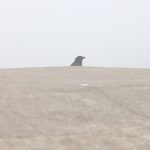 In the video installation  The Threat is There wide scenes of Marin Headlands landscapes are being consumed by a dense fog, views of far distances encompass emptiness and absence, and the horizon flattens into a white non-space, emphasising the exceptional visuality of the scenes and the need to let our view wander beyond the surface of the image, pointing to a specific (a)temporality of the scene. Time seems to take over the features of liquidity and appears to be floating between the past and the present.

The landscapes void of people are observed by hikers on the lookout inside of cement bunkers. Much like in a form of a film narrative in which fog is used as a sign of a fantom threat, or to conceal danger and whiten the darkness of the present, yet invisible enemy, the still presence of these observers inside of old sentry stations evokes a sense tension and threat. It is heightened by the sounds of circling helicopters and signals of foghorns and bells from the invisible distances.

Slowed down in his physical activity but attentive, anxious over the catastrophic probabilities of his environment, the visitor in this perilous place is beset with a singular heaviness; in fact he is already in the grips of this cadaveric rigidity from which the shelter was designed to protect him.
– Paul Virilo: Bunker archeology