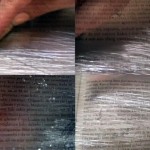 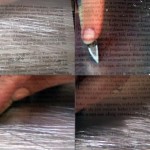 Description:
The video is projected on a horizontal plane of a white table, a chair in front of it, and a pair of headphones.
The image in the video is light, white and blurry and illustrates the narrator’s dilemma about the notion of nostalgia – of childhood memories, crossing over the western/eastern wall…
Routine is an abstracted quotidian place of parallel activities in which the time is a protagonist: the time recalled by the written text in the video, the time in which the text is read to us by the narrator in a different language from the written text, the time in which we follow the hand performing an action – scraping the surface of a shiny metal, the time in which all images and sounds overlap in the video.