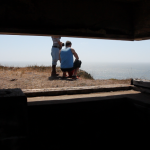 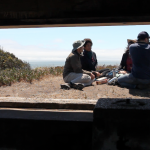 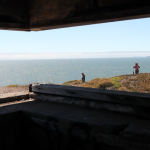 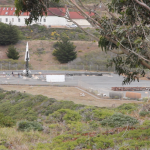 Placed inside a bunker, the camera rotates in a continuous 360 degree pan capturing the landscape and its protagonists through the bunker’s slits and openings. The gaze from within the cement structure reveals a seemingly normal situation, but also affirms the perspective – the fact of the bunker being an extrinsic and absurd intruder in the landscape.

As the camera looks through the slits of the front walls we see weekend hikers exploring the trails, walking, pointing to the sea or the hills, sitting to take a breath or a snack, but the back opening of the bunker reveals again and again, while camera pans around, a view of another military location where a missile is continuously and slowly being raised from the ground, erected into the firing position, lowered again, raised again, etc…