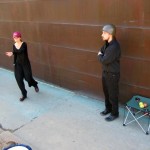 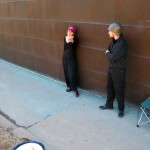 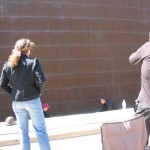 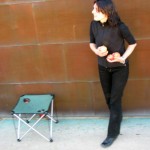 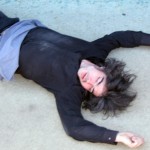 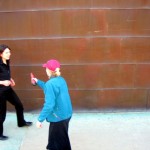 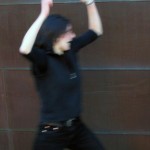 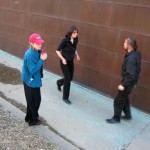 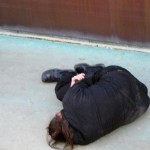 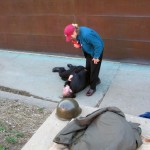 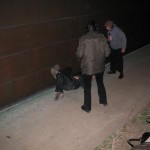 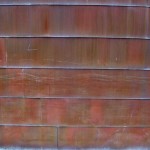 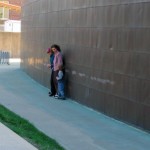 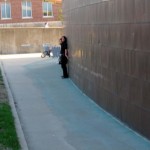 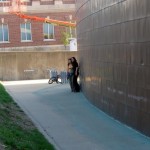 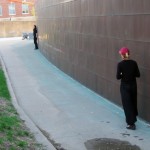 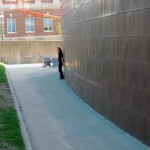 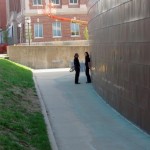 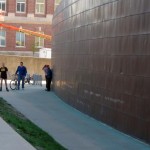 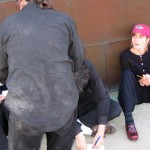 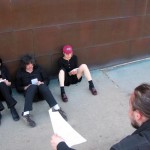 “An Ordinary 24 Hours” was performed once, from sunrise April 8th 2005, 6am till sunrise April 9th 2005, 6am, in Iowa City in front of the copper façade of the Frank Gehry Building on University of Iowa Campus.

The piece was structured and co-authored by Nadija Mustapic and Marnie Glazier. It was collaboratively performed and improvised by Nadija Mustapić, Marnie Glazier, Tomislav Friščić and Bryan Burgess.
“An Ordinary 24 Hours” was performed within a larger event on University of Iowa Campus, which presented public or interactive artwork and interdisciplinary collaborations on the theme of war.

It was heavily structured to allow for public – interactive improvisations to occur. The period of 24 hours was divided into cycles of three hours. During the first hour in the cycle (the hour of creation) an improvisational performance would get created based on set scenes’ titles, in the second hour (the performance) it would be performed and in the third hour (the documentation) it would get documented, written about and stored into files.
This “trilogy” was repeated 8 times.

During the repetition, the content of the performance, of the creation and the documentation period have been continuously and slightly changed only:
-due to the interaction with the audience in this public site,
-in response to the changing weather, temperature, and the participants’ physical, mental and psychological conditions,
-in order to explore the believability of scenes of conflict, which do not get accompanied with their resolutions

During the 24-hours of enacting, re-creating and re-documenting the same scenes of conflicts, the audience witnessed the performers’ physical and psychological efforts to sustain the matrix of the pre-determined process of repetition. The performers’ task was to get the audience to participate by improvising roles that would be assigned to them or to bring into the performance any other form of audience interaction, be it ignoring, commenting, criticizing or playing along.

The challenge was to balance, on one hand, the task of delving into the reality of exponential conflicts, and on the other, the mechanical process of arriving to an understanding or a template through the form of repetition. A sense of reality and of understanding was to be obtained through methodical examination of states of conflict in a context of repetitive and continuous paradigms. The mechanical and meditative nature of the repetition matrix (the cycle of three hours of the performance) suggested a method of arriving to a point of perfection (the truth of the matter), and/or to a point of de-sensitization.

There was a certain sense of urgency, which resulted from the intense interactions between the site, the building, the performers among themselves and with the audience, and the given time, temperature and weather oscillations, over and over again.
It resembled a vigil.