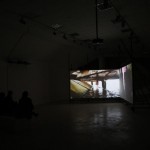 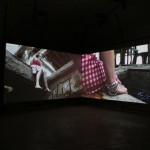 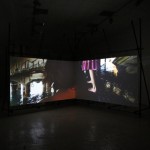 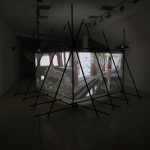 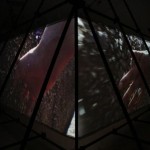 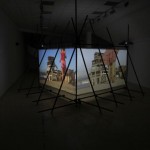 (Each projection is minimum 3 m x 1.68 m size. The videos are projected onto two screens stretched on erected scaffolding that constructs a 90-degree-angled architectural corner. Scaffolding is rusty and used.)

Synopsis:
A curious play occurs in an abandoned industrial setting, an old Torpedo factory in Rijeka, Croatia. A logical action in an actual space becomes transformed into surreal. The sounds we hear start to unwind the time of this building’s past. Under the afternoon sun, we are taken on a journey through waves of fiction and reality to join a (perhaps) imaginary protagonist in a play of discovery.

Description:
“An Afternoon Without Gravity” is set in a space of an abandoned launching ramp of the old Torpedo factory in Rijeka. A female character (the author herself) is present, performing in a mobile context of psychogeography. She moves through the site and discovers lost objects which she then uses as props in her play. She begins swinging on a tyre and the actual space starts transforming into an inner space of her imagination…

A non-linear narrative is developed through proposed systems of actions performed by the protagonist, which are defined by unpredictable mental and emotional processes.
Swinging is a reminiscent of childhood, nostalgia and of past times, but also of a sense of weightlessness. It is a back-forth movement of distancing oneself from and coming back to the central point of gravity through which one’s bodyweight is felt most.
In addition to swinging, the author utilizes other symbolic references that emphasize the sense of weight. An accent is given on visual representations of the weight of concrete and metal that were used for construction of this building. They reference the weight of the historical local context of this architecture. The passage of time and the shifting of light and shadows is shown by the use of time-laps technique. The afternoon is used as a metaphor for the fall, the setting (of sun and time), melancholy, the physical condition of a dilapidated building. Other motifs are present as well, such as touch (imprint of gravel and concrete on her hands or feet), erosion and textures (rusted metal in contrast with the smooth sea surface or rough architectonic blocks), a leap (marking the end and the beginning of the loop, but also auditive leaps through time or jumps from fictional into non-fictional depictions of space) as a moment in which loss of weight occurs, a moment without gravity…

The conveyed story problematizes the actual moment and the suggested time in the past or future. Different sounds begin to characterize various “timely” components. The protagonist’s bodily investigation of the space is in a dialogue with the sounds of the environment thereby confirming the unity of time and place of action. The presence of the author’s subject is unequivocal, as well as the issues of the tactile and the timely, the fictive and the documentary, the historical context of the location (Torpedo factory) and the geographic surrounding (city of Rijeka, author’s hometown), which are intertwined with the inner landscapes – the non-material world of the character as experienced in the mind of the subject.

Ivana Meštrov: from her text for the exhibition catalogue at SC Gallery (08.12.-22.12.2010.)
“A sense of discovery is being introduced through a curious game, in this space where location’s hermetic quality and the porosity of time continuously alternate. The two-channel image sometimes function as a mirror reflection, depending on the representations of the heroine’s symbolic appropriation of space. The sound is also treated as a “symphonic” reflection of spatial impressions of the industrial building, where documentary sound recordings of launched torpedoes, sounds of wind and of functionless space, and the sounds of author’s presence, simultaneously exchange. Nadija Mustapić captures the spatial dynamics in a way that could be linked to the Situations practice of psycho-geography. She threads visual strategies to research urban and geographical environments, and measures how much spaces transform individual and collective actions and vice versa, how the individual actions transform spaces – in the time of neo-liberal reality.”

Dalibor Pranjčević: from his text for the art magazine Kontura
“The architectural frame for “An Afternoon Without Gravity” (2010) is the launching station of the Torpedo factory in Rijeka. The levitational component suggested by the title of this two-channel video installation is visually present in the skeleton of this dilapidated abandoned industrial building, in which the upper, heavier part stands on rusty metal columns, which are visually weakened by the pulsating surface of the sea. The narrative problematizes the current moment, but also the past times. Different “timely” components are being distinguished by different sounds. The author’s exploration of found objects, relics of functional items from the past, is in a dialogue with the sounds of nature, confirming the unity of the place and time in which the narrative is situated. The field of divergences in this piece is described by the swinging action that seems to move not only the static devastated architecture, but also the mental “time machine”. The sound then becomes artificial and reminiscent of sliding and launching of torpedoes, while the time-lapse method enables the visualization of the “enveloping” of time. It becomes clear that Nadija Mustapić references the places of her own identity. In this context, the artist shifts her work from previously used non-descriptive spaces into a recognizable architectural location, and by doing so questions the stability of her geographic origin.”

Ksenija Orelj: from her text for the exhibition catalogue at Gallery MKC (05.11.-19.11.2010.)
‘We swing on the waves of fiction and reality, maybe in an imaginary building, maybe with an imaginary character. The experience of a logical action in a real time is being baffled by the use of close ups, inserted sequences and double editing, and cedes in front of an overall sense of parallel development of different events, interpretations of two-folded meanings – simultaneous immersion and distancing of the actors and the scene. These passages through time are being used to interrupt the one-dimensional level of representation, and point at the author’s thoughtful use of the medium. They disrupt our frames of view and our frames of personal reference. The internal world of the character lives in the internal world of the video medium, the very immaterial reality, which is experienced in the mind of the subject, and exists as a lucid reminder of the answer to the question where does “I” live.″