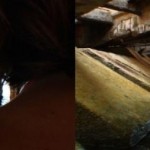 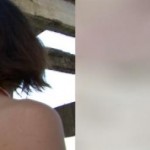 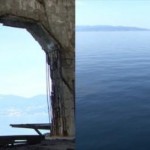 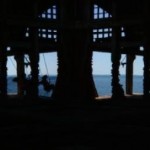 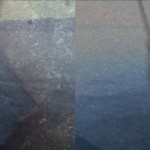 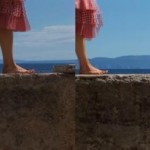 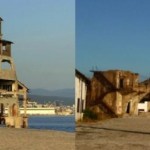 About the film:
The architectural setting for An Afternoon Without Gravity (2011) is a launching station of the old Torpedo factory in the city of Rijeka, Croatia, the author’s hometown. Component of levitation suggested by the title is visually present in the skeleton of this dilapidated abandoned industrial building, whose upper, visually heavier part stands on rusty metal columns, which are visually weakened by the pulsating surface of the sea below.
Narrative problematizes the moment of action which is taking place, but also the past times. Different ″timely″ components are being distinguished by different sounds. The author’s performative exploration of found objects, relics of functional items from the past, is in a dialogue with the sounds of nature, confirming the unity of the place and time in which the narrative is situated. The field of divergence is described by the swinging action that seems to move not only the static devastated architecture, but also the mental ″time machine″.
A sense of discovery is being introduced through this curious swinging game, as we swing on the waves of fiction and reality, maybe in an imaginary building, maybe with an imaginary character. The two-channel image in the video sometimes functions as a mirror reflection, depending on the representations of the heroine’s symbolic appropriation of space. The documentary sound recordings of launched torpedoes, the sounds of wind and of the abandoned industrial building, and the sounds of author’s presence are intertwined into a ″symphonic″ reflection of spatial impressions of the industrial building.
Nadija Mustapić captures the spatial dynamics in a way that could be linked to the Situationist practice of psycho-geography. She threads visual strategies to research urban and geographical environments, and measures how much spaces transform individual and collective actions and vice versa, how the individual actions transform spaces – in time of neo-liberal reality.

(In) Constancy of Space – Struggle for Identity (Osijek and Zagreb, Croatia)