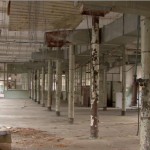 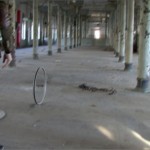 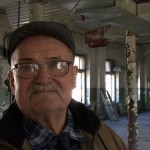 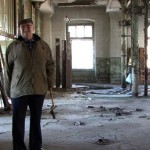 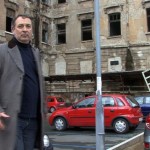 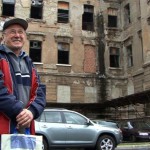 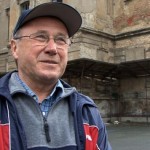 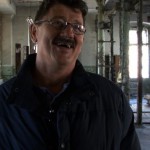 Rikard Benčić, For Example was commissioned by the Museum of Modern and Contemporary Art in Rijeka (MMSU) in 2008 to capture the memory of a building in the center of the city of Rijeka, the so called T-Object in the closed down “Rikard Benčić” factory. The city of Rijeka aimed to restore the T-Object and transform it into a new Museum of Modern and Contemporary Art in Rijeka. After over 15 years of planning, the canceling of the entire project has been announced in 2013 due to the lack of finances.
Completed in 2008, the film announces the development of the Museum master plan in the T-Object, which was current actuality at the time, and talks about the memory of the building and the past times of an industrial city. Today, while the city that lost its industry is still in search of a new identity, the film continues to talk about the old and the new memories of a building, which is still an object of reflection of (post)transitional changes in the local context.

Synopsis:
The film is a story about transformation and transition – of facts, time, emotions and expectations.

In part, it is a story about a building in Rijeka from the end of 19th century known as the Rikard Benčić factory, which hosted different industries, stood vacant in a state of semi-ruin for years, and is soon to be transformed into a new building of the Museum of Contemporary Art.

Its history represents Rijeka′s traumatic bout of deindustrialization, which raises polemics about revitalization of its postindustrial urban zone and finding a planning consensus to re-tailor the cities′ identity. Its transformation into the Museum represents a key point in the city′s new strategic plan. This port-city has been developing over the past decade of post-war economy decrease a new interest for a cultural renaissance and finally, tourism.

In other parts, it is also a story about the post-socialist transition period in the country and this city, consisting of lots of fast decision-making towards the western Modernity and of long periods of waiting: for economic backups, for bureaucracy to follow through, for politics to kick in or fall out…

Most of all, it is a story that reveals a series of emotional truths of workers who worked most of their lives in the ex Rikard Benčič factory: their moving recounts about the ″heroic″ times of progress, friendship, equality and well being, which ended in the turmoil of the 1990s – war, national aptness, the fall of worker’s unions…

(In) Constancy of Space: Struggle for Identity, (Amsterdam, Netherlands)

‘We Need It – We Do It’ (15th VENICE ARCHITECTURE BIENNIAL)

From Within the Giant’s Belly (MMSU, Rijeka)