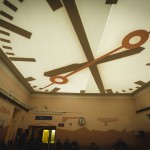 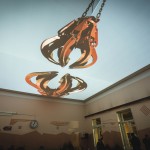 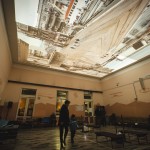 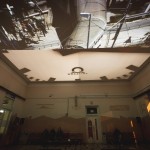 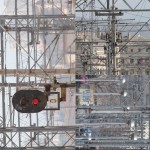 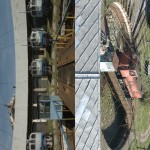 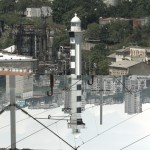 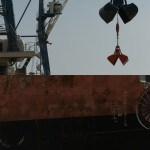 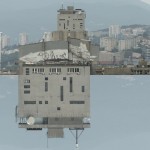 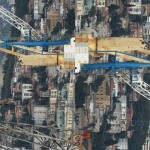 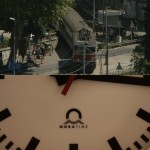 More details about the project HERE.

Short Synopsis:
Waiting Room for People, Machines, and the City (2015) is an immersive video/audio installation that examines the de-industrialiation process of the city of Rijeka caught in the post ’90s Croatian period of tansition, its port and railway system that for over a century have been key determinators of the city’s ‘blue collar’ identity. “What we are waiting for, we do not know, so whatever may happen.”

Description:
The video and sound installation Waiting Room for People, Machines, and the City (2015) has been created especially for the railway station waiting room. In the artwork, the images of the railway station and the port area are projected to the ceiling: the station, railway tracks, switches, locomotive repair garage, loading docks…

The installation has been displayed in the railway station in Rijeka, Croatia, where port, railway, and ship-building industry has been undergoing a slow and difficult process of loss and transition over the past 20 years. In the video the viewers witness the succession of scenes which represent the part of the city in which the railway station is located, including the port which is integrally connected to it, then the machines, whose role in the film is played by almost the whole repository of the railway and the port, from railway tracks, electrical wires, cranes, switches, to locomotives, cars, warehouses, station facilities, inventory, and finally to the already mentioned clock that stands as a symbol of all railway stations or all possible waiting rooms. People are mostly represented by workers, switchmen, train captains, cleaning ladies, in other words, by all those above whose heads hover the dark clouds of the decline of the Rijeka Railway Station and threaten to leave them unemployed. Of course, there are some passengers here, they are a minority, even more so, they are presented almost on the individual basis, and it seems as if we almost personally know that handful of them. The metaphor of the waiting room includes machines that are also waiting, the whole of railway hardware is on stand-by. And the city is waiting for the very same destiny that the waiting room has already met. Or, they are all together waiting for the implementation of the project that was developed a long time ago yet never realized.

Still without a clear itinerary of where the industry is going and how it will arrive there, Rijeka is considering its possible futures. Concurrent with the city’s plans for future, many of its citizens have lost and continue to lose their jobs at the remaining working factories. There hangs a question in the air, if the city will ever prosper again without its industries.

The story of the industry and thus the installation can be interpreted as a powerful metaphor for the narrative of Croatia itself, which has seen great success, crushing failure, and drastic change over time. The project is ultimately about different kinds of waiting: for a train, for a future.

The installation can be presented in different (public) spaces such as railway station waiting rooms or  or some other (post) industrial spaces, but can also be installed as a ceiling projection in a gallery/museum setting, for example on a hanging ceiling/screen, etc..

Also, depending on the installation room, its dimensions and aesthetic, bean-bags or other types of floor sitting/lying arrangements (benches, etc.) can be made to facilitate the viewing of the installation by the audiences.

Description of the Site-Specific Event @ Rijeka Train Station waiting room:
In February 2015, residents of Rijeka and visitors to the city experienced a living story of the historic port and railway strip. Since December 2013, artists Nadija Mustapić and Toni Meštrović had been creating a multi-channel site-specific audio/video work called Čekaonica za ljude, strojeve i grad (A Waiting Room for People, Machines, and the City). This work has been created especially for the railway station waiting room. It takes a poetic documentary approach to telling stories of the historically, strategically, and aesthetically distinctive sites along the railway strip and the port area: the station, railway tracks, switches, adjunct buildings/shacks, locomotive repair garage, the closed locomotive turntable roundhouse, the silos, the port area warehouses, docks, and cranes.

The railway station waiting room is chosen as a symbolic home for the public installation in February 2015 because it is a historic point of departure from and arrival to Rijeka. Built during the Austro-Hungarian Empire in the mid-1800s as one of key access points to the Adriatic for the Empire, this train station marked the moment when the city of Rijeka was connected with Central Europe for the first time by railway and became Budapest’s port access to the sea. Rijeka grew into a strategic and established port city, as well as a significant industrial city, which kept its “blue collar” identity until 1990s.

Over the past 20 years, Rijeka’s port, railway, and ship-building industry has been undergoing a slow and difficult process of loss and transition. Still without a clear itinerary of where it is going and how it will arrive there, Rijeka is considering its possible futures. The current General Urban Plan (GUP) presented in 2006 prioritizes the re-purposing and re-structuring some of historically industrial and port-related areas in the city’s center. Concurrent with the city’s plans for future, many of its citizens have lost and continue to lose their jobs at the remaining working factories—those which haven’t already been brought to bankruptcy or closed down in the war‐torn period of the 90s. Residents are unclear about the future of their city. Many are skeptical that this city will ever prosper again without its industries because other economic bases will be challenging to sustain in the context of Croatia today. The story of the port and railway is a powerful metaphor for the narrative of Croatia itself, which has seen great success, crushing failure, and drastic change over time.

As with previous works, the artists Nadija Mustapić and Toni Meštrović have captured the textural qualities of a certain place, and have constructed and abstracted poetic narratives. This project is ultimately about different kinds of waiting: for a train, for a future. The actual railway waiting room and its participants become a part of the work themselves, part of the change that the site—and the city—is undergoing.